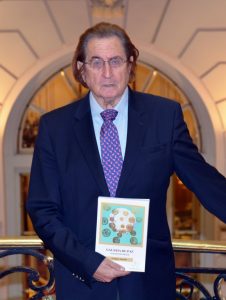 The ambassadors of Bosnia and Herzegovina and Palestine alongside the ambassadors of Cyprus and Ghana were witness of honor about the release of the latest work of Joaquin Antuna, President and Founder of Peace and Cooperation.  The book is part of a Spanish quartet edited by Peace and Cooperation. It is the fourth movement of this Spanish symphony as defined by the author it began with the Perplexed Man and continued with the Spanish Labyrinth and Chronicles of the Third Spain.

The CEU professor of economic structure, Javier Morillas scrutinize all the text with a decent expertise of the copyists of the Middle Ages’ sacred texts. Alfonso Ramonet pronounced some words full of feeling and sensitivity. He piloted the ship with his usual dexterity, Jose Luis Izaguirre from the command post of his Juan Sebastián Elcano social gathering was marking time in this storm of ideas and suggestions that are enclosed in these five hundred pages of great height in a chronic described as passionate with satirical and philosophical labyrinths trim the burning reality of the last few months of the Spain government in office.

As Professor Morillas related, the characters described by Antuña came alive from Mariano, national stepfather, the man who made startle the Spanish people waying in the dream of opulence, the sensible boy of Hospitalet, that being Moses today we would have 400 Commandments instead of 10, the snake charmer trying to lead the country to an uncertain future collecting the breath of the indignant 15 M, the main character, divine Peter, the Mandela of Pozuelo who wanted to reach the Moncloa at all costs and that even in his misfortune went to Disneyland with her daughters to
hum and whistle on if I were rich transformed in if I were king of fiddler on the roof among the fantasies of Disneyland but his pedrolandia came down on a Sunday wretched of October. He could not miss the unutterable semblance of mayors Carmena and Colau in the best Spanish tradition to mess with the mayor. 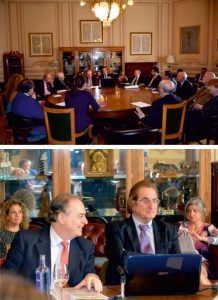 The author defined his book as a mosaic full of humor and satire in the style of The Quail, the most audacious magazine for the most intelligent reader who laughed at the Spaniards in the long years of dictatorship and called on Miguel Miura and Enrique Jardiel Poncela. A known tertullian, great journalist and author of books liken it to the unforgettable Cesar Ruano, for which Galaxy of Peace relived the style of humorous. The main thesis of the book, which is discovered by reading all the articles is that while the response to French May 1968 were the recipe of the Club of Rome that drove the global economy, 15 M, it occupies Wall Street that have failed to have a replica to its many successful criticism.

The diagnosis of inequality and global problems that humanity faces were very patents but nevertheless without a great deal of creativity we are at an impasse. In this scenario continued the president of Peace and Cooperation, the deep gap between rich and poor is widening rather than shortened and in the case of Spain the vision of Greek pensioners suffering a decline of 30
percent in its assets and moreover the police batters them, these are not exactly the best presentation for young Turks of Podemos. Use recipes of nineteenth century like Bakunin and Karl Marx have failed to empty what Khrushchev who used to say that people need goulash dishes rather tan indoctrination. As Morillas repeated several times, the book does not beat around the bush of philosophical byways but was sparkling and full of humor.

Finally, the author talked about his book in Buenos Aires thanks to the Good offices of D. Xulio, Xulio Xid whom he defined as a character out of the film Casablanca with raincoat and hat who he very is grateful for the momentum that he has given him to collect his items and extended his thanks to Alfonso Ramonet who could have been a great chamberlain at the Viennese court of Franz Joseph emperor and his Sisi and Jose Luis Yzaguirre great journalist who could get out of the pages of Lord Bayron and Mary Sheley.