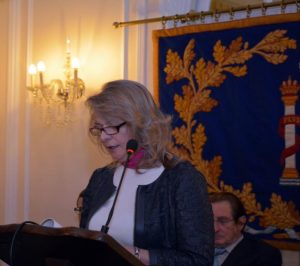 The Centro Riojano of Madrid, located in Serrano 25, very close to Goya, is one of the most beautiful buildings of the stately street Serrano, with a beautiful staircase, which always fixed the cache of the buildings of the time, has large rooms highlighting the language room, the boardroom, the large dining room, an entire patrician house. The staff is very friendly and has that good manhood, so typical of the people of La Rioja, who are men forged all at once without folds but always with great nobility. On the afternoon of this 21st of March, a very cold day in Madrid, with an icy air that promised a good sowing of colds and flu, the presentation of my book “Crónicas Mordaces” was celebrated. José Antonio Rupérez, who is the official gallant conductor of this wonderful Centro Riojano, carried out the baton of orchestra conductor, with great mastery and with his charming know-how. A very full room, that of the language, which is doubly fortunate for an author. The ambassadors of Cyprus, Palestine, Serbia, South Africa and Thailand met among people of culture, journalists such as Juan David La Torre de Diplomat and, in short, a whole public interested in culture.

This Centro Riojano, which focuses on all its acts, is very enthusiastic and appreciates the efforts of the world of Culture. Regarding the act itself, I don’t want the kind reader to accuse me of presenting a hare cake, without a hare, I have to say that my chronicles were very well criticised, they are your chronicles, dear friends of Galicia Digital.

The flu knocked out Alfonso Ramonet, who has written a precise Epilogue and also the brilliant Carmen Deben. Those who were there, let’s mention Rafael Cordero from the Communication Service of the Complutense that made a very elaborate synthesis of the structure of the book and the motivations of the author. The Bella Rosa Olazábal, was pimpante, as always, exposing a writing of the journalist and writer Carmen Deben. Very pimpante and painter the editor Alejandro del Río Herrmann, who seems a nice of Goya’s, portrayed this book composed by chronicles, as a “diary”, where the entries and exits of each day are reflected, enriching them with the daily events. Alejandro is very accustomed to very difficult texts because he is editor of philosophical books of this Trotta Publishing House and he left the pass with his usual majeza. The presenter, José Antonio Rupérez, the Centre’s official gallant, was very convincing in recounting the author’s biographical features and framing him in the rich cultural activity of the house. A great presenter for an unforgettable evening.

I must tell you, kind readers, that I had been suffering from the flu for a few days, of a father and a very gentleman of mine, and that I had difficulties in getting enough resolution to face the public.

To do this, as soon as I arrived, I asked them for a glass of cognac and a glass of water. I told them that my way of writing was always passionate and that in the room and I pointed to the ambassadors of South Africa and Palestine, were two of my great civic passions, t 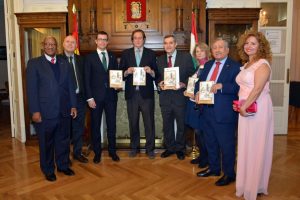 he fight against racial discrimination and the affirmation of a stateless people like the Palestinian.

I went on to enumerate the great causes defended in these chronicles, which although they do not leave puppets with heads, they do so to cheer up, amuse and influence. I thanked several friends involved in these causes that were present. It was a very attentive and dedicated public, from Pilar Barroso, the wonderful principal of a school to José Ramón de Casa Manolo, that the spirit to be productive needs to be nourished.

And as in the Goyas, I did not leave aside the family brushstroke talking about my sister, also mentioning the exuberant Giorgia, as elegant and hardworking as always and all those people like José Antonio Gimbernat, the human rights magician, and Joaquín Santisteban, the finance magician, and Andrés de Miguel, the bullfighting magician. And to all the others who give us encouragement to move forward and whom I thanked very much for their presence.

Afterwards, the Centro Riojano gave us a very substantial red wine and we went on to sign books, dedicating them with greater or lesser success. Here I must highlight how beautiful is the cover of the book by the great Bulgarian painter, Valentin Kovatchev.

That is how this evening closed in the Temple of the Castilian which is the Centro Riojano of Madrid, with José Antonio Rupérez wielding the baton.

Many thanks to all without forgetting Galicia Digital and his experienced helmsman Don Xulio and his daughter Teté with his clever Pablo.