The Chronicles of the Divine Pedro

The Chronicles of the Divine Pedro 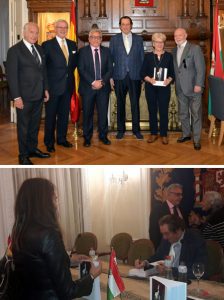 On March 6, the presentation of the book by Joaquín Antuña, president and founder of Peace and Cooperation, with the title of “The Chronicles of the Divine Pedro”, which he promised from the beginning with this name, took place at the Riojano Center of Madrid, an entertaining and relevant session for the current political situation.
They attended the event, accompanying Joaquín Antuña, Miguel Ángel Menéndez del Fueyo, a relevant architect and promoter of the Film and Architecture festival, founder and CEO of Comamsa; Don Antonio Manresa, deputy spokesperson for Ciudadanos and councilor in the City of Alicante; and finally, Arturo Pérez Martínez, career diplomat and Ambassador of Spain, with different positions of relevance in places like Tokyo, Washington, Ottawa or Vienna. To all this is added, the presence of María Gloria Martínez-Manso, General Secretary of the Board of Directors of the Riojano Center that presided over the event.

Among the attendees who filled the Hall of the Language of the elegant and stately Centro Riojano in Madrid were the ambassador of Cyprus, Koula Sophianou, the actor Pepe Ruiz, the Avelino of Marriage Comedies, the Romanian photographer Nicoleta Lupu author of the cover of the book, Manuel Rodríguez de Maribona Delegate of the Nobility Body of the Principality of Asturias, the journalists Roxa Ortiz and Eduardo Jaudenes, the researcher Rafael Cordero, the financier Joaquín Santisteban, the head of studies of the Caude College of Majadahonda Pilar Herreros Avilés, the writer from Bangladesh Chaklader M.Alam, the Italian poet Gianna Prodan, the president of the Arab correspondents Nazmi Youssef Salsa and the protocol director of the Archdiocese of Madrid Alfonso Ramonet.

The presentation began at the hands of Miguel Ángel del Fueyo, Joaquín’s compatriot, since both are Asturian and spend their summer in Salinas, where they met. It will be in Asturias, where the author was born, where a new presentation of the book will be made in the Nueva España newspaper on March 19. Miguel Ángel spoke about his relationship with Joaquín and his ability to write lively, comedic and innovative articles that make up the book, being undoubtedly a cultured, hard-working and ingenious person, and that in his articles “there is no resistance of any kind” since everything is entertaining and fun, referring to the recent published book by Pedro Sánchez.

Then there was Antonio Manresa, who described the book as visionary, published at the right time for the current political situation, composed of some fresh, instructive chronicles, and by the hand of a tireless worker like Joaquín Antuña. Manresa made in this and later interventions a fine analysis on the current political situation in Spain and the upcoming electoral panorama.
The last to intervene, Ambassador Arturo Pérez Martínez, began by stating that personally the book “overwhelms” him, for his impeccable writing, the information and the relevant topics that are treated, the constructive criticism it contains and the honesty, all without a doubt that perfectly describe the book. Without a doubt, it is a book that contains serious and sensitive issues that concern the president of the government and it is we who suffer the consequences. Arturo Pérez, referred to an article in Joaquín’s book when he said that “Spain is now plurilandia” and Spanish people are “citizen sufferers”. In the book, current affairs contain, according to the Ambassador, a good dose of improvisations, corruption, lies, post-truth, and the need to perpetrate on power. With certainty, the Chronicles put our reality to the bare, where the consequences hurt us, but with that we take good note for the next election.

Arturo Pérez Martínez also referred to the two sources of inspiration of Joaquín Antuña, on the one hand, Jeffrey Sachs and on the other, Aurelio Peccei (founder of the Club of Rome and which was a before and after in the life of Joaquín). With this, we find articles dealing with international issues, referring to global problems, while thanks to the influence of Peccei, the book contains articles on Italian politics and religious issues related to the Vatican. In turn, Joaquín is the president of the NGO, Peace and Cooperation, which enjoys the ECOSOC Consultative Status of United Nations for its defense of the values and ideals of the United Nations in the school world, an impressive work carried out through the organization of awards and international school exhibitions such as the international competition recently concluded in the tourist city of Pafos in Cyprus, which was convened with UNOOSA, the Office of the United Nations space, at its headquarters in Vienna and the current school campaign with CTBTO, which makes the Nuclear Test Ban Treaty a reality and warns world public opinion about its vital importance to preserve life on our planet
Finally, Joaquín Antuña, author of the book, admitted his adventure of writing these chronicles and that they had become a vice and a great passion. More than a thousand articles since 2015. He related the emergence of the creation of the Divine Pedro, who began in August 2015, where he discovered the character of the Divine Pedro with his ego and glory, a kind of David by Miguel Ángel. It is in 2016 when he publishes the article “The agony of the Divine Pedro”, referring to Pedro Sánchez as a Saint Teresa of Bernini, with his ecstasy in which he has an idea and a mission, with a great sense of greatness, in which already in 2016, he affirmed “that he doesn’t believe in majority of parties, but he believes in social majorities”, thing that is observed at the moment in his electoral campaign. A possessed by a divine madness.

From then on the Divine Pedro began to take shape and it was during this last stage, due to the current political situation, in which he carried out the vast majority of articles of the Divine Pedro and his Court of Miracles, with Carmen Equality and his marjorettes accompanied by the Astronaut, Sancho Abalos, the Mary Poppins of Economy and the reincarnation of the minister José Solis Ruiz from Cordoba, the María Jesús Montero from Seville, as well as from the Catalan independents Carlitos el Tramposo and the Illuminated from Blanes. A whole comic and a consummate hispanic grotesque. Without missing of course it is the mayors Carmena and Colau that put the icing on this cake of the Iberian nonsense.

Joaquín Antuña, affirmed that right now we are in the electoral campaign, but that his book was never intended to be a political rally, but rather to create a fictional character in which things happened to him, making a satire of current Spanish politics. Adding that the Divine Pedro has returned to the theory of the two Spains, to the tombs and to the obsession for Franco. But above all, he highlighted an aspect that is not being addressed in current politics and that is of the utmost importance, such as taking “global warming” at face value, at the moment when ecology has become the new God with its dogmas, which no one dares to question, since they are articles of faith. As a disciple of Aurelio Peccei, he believes himself authorized to question and qualify some of his conclusions.

To adopt a New Green Revolution without a critical sense is to put Europe’s industrial policy at risk, since according to Joaquin we must take into account that if we work hastily and foolishly and crazy we risk the jobs of the workers, which should be protected with nails and teeth, and affirms a cruel paradox that the supposed political parties that call themselves defenders of the working class and that support plans to prevent a gloomy panorama of catastrophes in the year 2050 are their main enemies, since they put their positions in danger of work. He gave as an example the automobile industry threatened by the electric car, the precipitate closing of thermals and nuclear power plants. He pointed to the minister for the ecological transition, Teresa Riber, as the number one public enemy of the workers.

Joaquín said that we must fight against climate change and pollution, but without disarming European and Spanish industry, as it would be throwing ourselves into the arms of the Chinese, Koreans, Japanese or Americans. That is, carry out the process with intelligence as they are doing the Chinese, always taking as a priority the defense of employment.
Joaquín Antuña stated that accepting ecology as a religion is very dangerous and that the theories of the Club of Rome on climate change should be questioned, possibly because they are erroneous. Since we are in the hands of very powerful people who believe in this new god, who doesn’t really know who he is and therefore, there is a “collective cretinization” that has nothing to do with progress.

Undoubtedly, the book contains a large number of articles dealing with international issues and is very relevant in political matters. At the same time, they are very diverse and as Joaquin defended “they take our hair at all and because of that, I allow myself to be teased to them”. Without a doubt it is a fun book, skimming the comic and satire, with a humor that would be defined as the French newspaper the “canard enchaîné”, and that makes one think, laugh and reflect. Have fun instructing and do so in the Rioja Center of Madrid “where you taste and think”.