The New Cavern, a different vision

The New Cavern, a different vision 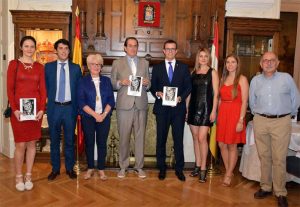 Presentation of the last book of Joaquín Antuña “The New Cavern, a different vision” at Centro Riojano Madrid with José Antonio Ruperez and Alfonso Ramonet.

Once again, GD was key in an event in Madrid, this time at the Centro Riojano located in the neuralgic center of Madrid fashion, Calle Serrano almost corner to Goya. The motto of this center could be “Taste and Think”, as they organize wine tastings even international as the next day 15 of Azerbaijani wines, and always clear is with exaltation of its wines from La Rioja that as Chianti in Italy give meaning to a territory, this region is proclaimed as mother of the Castilian and the CR organizes readings of Gonzalo de Berceo, as you see kind readers, is tasted and thought.
On the 4th of October at 7 p.m. the presentation of your intrepid editor’s book was celebrated, a little Meterete that is everywhere, as those who comb gray hair among you will remember.

In front of a room called “Sala de la Lengua” full of people, the brand new and young president of CR, which by the way is not the mourned CR7 by the madridistas, went on to introduce the act and passed the word to Alejandro Echegoyen, an Argentine photographer well known in the artistic and diplomatic media, was very brief, he limited himself to say that every day he used the dictionary to learn new words from these cave chronicles. Then, Alfonso Ramonet covered the walls of Catholic morality and pronounced a brief, but resounding definition of the ethical meaning of life, it was a pleasure to see him in his nearly ninety years stand as a lion of Judah, genius and figure.
For his part, José Antonio Ruperez to whom the book is dedicated gutted my book as if it were a butcher of sales, proving to have read each and every one of the chronicles, which is very thankful, since in many book presentations there is usually no more than comments taken from the prologue. He pointed out that every day at seven o’clock in the morning he received the GD chronicle that served as an alarm clock, as José Luis Izaguirre also says that, by the way, he presented four other books of this GD saga.

I don’t want to tell you in detail what José Antonio said because my modesty, it’s a joke, he won’t let me, it was an incentive to keep writing and telling many things, pulling current events, fantasies and memories. With what a good Galician pot is made, adding a few drops of Don Xulio’s sentidiño.

It was my turn, I had a script that I 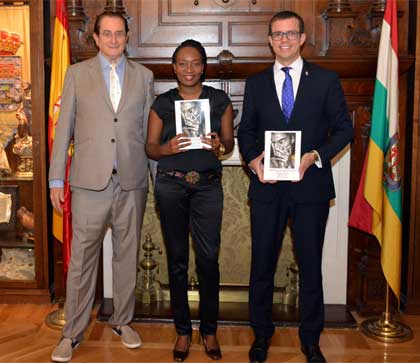 had prepared with the help of Ester sin h, but I immediately discarded it and improvised a whole speech meeting and that’s how things were.

I explained to my attentive audience that Gonzalo de Berceo represented the three constant homelands, the Castilian language, religiosity and picaresque. At this point it was inevitable to refer to the black cards and all the tricks of all of us sons of Iberia.

The new cave represents a return to the 19th and 20th centuries, defended by our tawdry progressives who, instead of looking to the future and clearing the jungle of new technologies, of the digital era, are pleased, rejoicing in the confrontation of the civil war, in anticlericalism and in turning the ladies into Amazons with lance and everything. The latter is already in the 21st century.

The cover is a splendid and dramatic photograph of Nicoleta Lupu, a full-body photographer, torn, authentic, fumigated, enclosed in a slender body of a young beauty, but with mephistophelic rears.

There was a time for questions, all very focused on the content of the book that I thanked very much.

Afterwards, as it could not be otherwise, the galactic president invited us all to taste the wines of La Rioja, this fostered friendship among those present and heated the atmosphere. Meanwhile I had the pleasure of gods, which for anyone who writes it is, to sign a lot of books.

How beautiful it is when, as in this case, Galicia and La Rioja join hands and participate in the search for the common good invoked by Alfonso Ramonet and in the hope of a possible regeneration of all of us who are sometimes nice, cheerful, but cheats, acrats and seekers of the philosopher’s stone to keep it, of course, through nepotism, mischief and other bad practices. Long live Galicia and long live La Rioja!

To my dear readers I recommend you to visit the Centro Riojano, where you can taste and think and there is also a wonderful restaurant. José Antonio, you are at the helm, watch out for the patch, and congratulations on this endearing act yesterday.