To celebrate the 40th creation anniversary of Peace and Cooperation (1982-2022), a lecture, organised by its current president Mrs Rosa Olazábal Valle, took place on 21th december 2021 at the Real Casino in Madrid. This event aimed to celebrate this anniversary and remember the life and work of the one who was its founder and president, Mr Joaquín Antuña León, deceased last year. Great leader, he left his trace in the Peace and Cooperation organisation, achieving lots of projects for the benefit of youth in several countries of the world. Well-rounded journalist, he demonstrated this quality every day through his columns published in the Galicia Digital news website.

The lecture, chaired by Mr Gerardo Seco Ródenas, Real Casino of Madrid board of directors’ dean, began with the speech of Almudena Arribas Bergado, Real Casino of Madrid board of directors’ member and education advisor, followed by Arturo Pérez Martínez, Spanish ambassador and Academy of diplomacy’s advisor, and the academician José Luis Yzaguirre Romero. Every speaker emphasised the Peace and Cooperation’s great work, known in Spain and in the world.

Then, the lecture ended with the speech of Mrs Rosa Olazábal Valle, Peace and Cooperation’s president, reminding the creation of the organisation by Joaquín Antuña León 40 years ago, which later has become a Foundation. Joaquín Antuña León devoted his life to the institution dedicated to strengthen the relationship between young people from 5 to 15 years old, by making them discover the artistic and personal vocation, in cultural diversity, through several fields as drawing, painting, sculpture, literature and all that allows the highest development of the human mind.

Mrs Rosa Olazábal Valle also emphasised the several years of endeavour, commitment and determination that have led to the recognition of Peace and Cooperation’s work, through numerous awards. Thus, in recognition of the human values promoted by the Foundation, the Santos Ángeles Custodios de España, Amigos del Cuerpo Nacional de Policía association will award on 26 february 2022 its Merit medal to Peace and Cooperation. 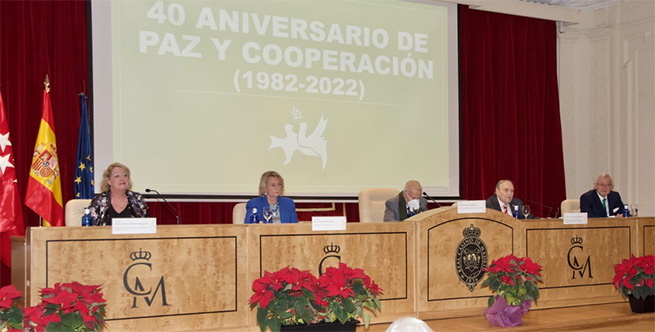