The Centro Riojano in Madrid welcomed for the first time the presence of the Turkish ambassador Cihad Erginay, a diplomat with the appearance of an international negotiator or John le Carré, who has a great gift for words and excellent clarity of presentation. He gave a brilliant lecture in perfect English, very didactic, on regional security in Turkey within the framework of the II United Nations Forum for Peace and Cooperation and the Centro Riojano.

A bouquet of ladies from Madrid’s social life such as Roxa Ortiz, Julia Moreno and Georgia Hristea and brainy gentlemen such as the Spanish ambassador Arturo Pérez Martínez, Carlos Uriarte the pan-European and Enrique Gaspar the silk man with the stupendous staff of the Ángel center and Charo with the director of communication Juan Antonio Mardomingo shone with their own light. Among my students my assistant the beautiful Ester Garcia, the Italian brain Alessia Busi, Molly que Mola from the United States and the promising Olena from Ukraine.

The table was composed with Ambassador Renata Vázquez – a formidable translator, Joaquín Antuña, President and Founder of Peace and Cooperation, and José Antonio Rupérez President of the Centro Riojano: who stressed Turkey’s key role in the Middle East peace process and the links that exist with Spain, ranging from past misunderstandings to the present Alliance of Civilizations, whose Commissioner is former Foreign Minister Miguel Angel Moratinos.

Using humor and detailing neighbors in both the Black Sea and the Mediterranean, he said it would have been easier to be New Zealand’s ambassador. He detailed the millennia-old border with Iran. The Syrian problem and Cyprus’s pending resolution.

He outlined the “Heart of Asia” project and focused his lecture mainly on the fight against terrorism and humanitarian foreign policy.

Terrorism is defined as a crime against humanity and a global threat: Turkey as Spain has suffered it with more than 50 thousand victims in 40 years. For this reason, it is part of many organizations and operations to combat it, such as Operations Euphrates Shield and Olive Branch, the Global Forum against

Terrorism, the Horn of Africa Working Group and the Anti-Daesh Coalition. 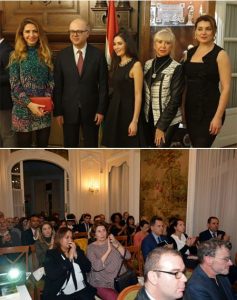 He assured that one of the greatest threats is the PKK (Partiya Karkerên Kurdistanê – Kurdistan Workers Party), recognized as a terrorist organization by both the European Union and the United States, and its derivatives, the PYD and YPG: according to the ambassador’s presentation, they share the same cadres using the same training camps and have the same financial resources.

He dissociated himself from the belief that Turkey’s policy is directed against the Kurdish people by emphasizing that terrorist organizations do not represent the Kurdish community, the great majority of which does not support them. He also listed as a terrorist group the FETÖ, which was responsible for the attempted coup d’état in 2016.

Speaking about Syria, a key piece of his foreign policy, he explained that his mission is primarily humanitarian and reconstruction of the country, facilitating the return of millions of refugees to their homes

He said that his country had almost entirely covered the high cost of this operation, which amounted to more than 40 billion dollars, and that Turkey had thus provided a great deal of aid to the European Union.

Turkey is also combating international Daesh terrorism and preventing thousands of international terrorists from returning to their countries without guarantees of reception.

The ambassador defined humanitarian and entrepreneurial foreign policy as one of the priorities of Turkey’s foreign policy: among his plans are the improvement of strategic and commercial relations, the development of links with all geographies and the strengthening of cooperation with regional and world organizations with soft power. The country is also a NATO ally and a reference point for Euro-Atlantic and national security, as one of the largest contributors, the sixth.

The conference ended with a vision of the impact of the regional situation on the European Union: the words of fo

rmer NATO Secretary General Javier Solana were quoted: “Europe will only be a peaceful and happy continent when the security of its neighboring regions is assured”. He also reminded us of the agreements between the Union and Turkey, which are still not fulfilled after three years, but which have at least given relevance to the human drama of the refugees.

In conducting the debate, I stated that in the Centro Riojano there is tasting and thinking and that as a result of this Forum there will be a tasting of Turkish and Rioja wines, as Jose Antonio Ruperez said, the gallant Riojano and the ambassador will give a lecture at the Caude school in Majadahonda on the mythical figure of Mustafa Kemal Atatürk, all this in the spring.

Thus, was sealed an evening of Turkish passion and friendship between the peoples who always promote the Centro Riojano and Peace and Cooperation.

After a lively colloquium with intelligent questions, an excellent wine from Rioja, Turkey and Spain was offered, which contributed to leave a pleasant memory in those who were lucky enough to participate in this magisterial conference within the framework of the II United Nations Forum.