Costa Rica, an oasis of peace

Home/United Nations Forum/Costa Rica, an oasis of peace
Previous Next

Costa Rica, an oasis of peace

The United Nations Forum for Peace and Cooperation is moving forward: last Friday, October 22, the Centro Riojano in Madrid was once again the site of discussions on international issues. This time it was Costa Rica, on the occasion of the celebration of its Constitution Day, and the main speaker was H.E. Ambassador, Mrs. Ana Helena Chacón Echeverría. 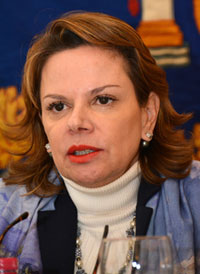 Before passing the floor to the distinguished Ambassador Gloria Martínez Manso, Secretary General of the Centre, she introduced Joaquín Antuña, President and founder of Peace and Cooperation, who described Costa Rica as a miracle country, a true consecration of peace: a country whose army is made up of teachers and health workers and which stands out for its stability, which continues to have only one civilian guard in an environment of problematic and revolutionary neighbours.

In the ambassador’s intervention, the history of Costa Rica was  described by listing the various constitutions that had been approved since the independence from Spain, which she described as a “divorce, but one of the good ones”: in reality, the first political constitution dates back to 1812, with the Cadiz Constitution of the Spanish monarchy. When it became independent in 1821 it proclaimed the Covenant of Concord, which exalted freedom and declared the Roman Catholic religion as a state religion.

In 1823 it separated from the General Captaincy of Guatemala and the following year Costa Rica adopted another constitution: human rights and the division of powers, an essential requirement for democracy, appeared here for the first time, despite some intrusions into the internal system. From this moment on, the country began to develop towards the creation of more and more inclusive social structures. 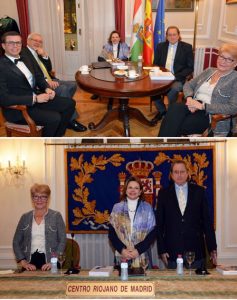 Public, free and compulsory education was established in 1839: Costa Rica values training and human capital, aware of the high price of ignorance. Throughout the 19th century, the death penalty was abolished, university autonomy and direct universal suffrage were introduced in a presidential system, which between 2010 and 2014 saw its first female president.

The ’40s of the last century were decisive: in 1944 a labor code was approved, which includes a tripartite insurance system and free medicine, which taxpayers pay with taxes. On the occasion of the 1948 elections and an alleged fraud, the country’s last civil war took place: José Figueres Ferrer was one of the protagonists until the dissolution of the state and led the Board with executive and legislative powers.

This Board drafted the current constitution in 1949: it was the last time that the text was completely rewritten, today it prefers to avoid constituents and modify it only with partial reforms. Although the feminist movement existed since the ’10’s, women obtained the right to vote on this occasion and voted in a referendum in 1951 and in the 1953 elections.

What marked history was the abolition of the army: thanks to this decision, it is possible to invest in other sectors to promote peace, security and equity. Costa Rica invests 20% of GDP in the social sector, 8% in education and 2% in measures against poverty: instead of relying on the army, it defends its sovereignty under international law.

Like all countries, there are always improvements to be made, against inequalities, for greater participation and better quality: the same ambassador has worked to include in the labor guarantee also the groups that were not there, such as domestic workers and is working for a gender approach in security policies.

At the end of the presentation, she confronted several questions about different aspects of her
country: this is how we learned about the environmental commitment she has, about measures
against gender violence, about the integration of indigenous people – uniting respect for culture
and the fight against poverty – and about the transformation in the perception of the country’s
citizen security due to drug trafficking and its attractiveness to the poorest social classes.

Above all, at this difficult time for countries in Latin America, Costa Rica is an example of a
commitment to peace and stability: we hope to see other countries move in the same direction
to contribute to global peace and the consolidation of international law.