The Diplomatic Academy of the Kingdom of Spain is an institution that has gained great prestige by combining the best of Spanish and international diplomacy.

Its organ of communication is the magazine ”Diplomacy XXIst Century”, the first publication of its kind, which is written by diplomacy professionals who incorporate their wisdom, knowledge of the issue and enrich it. 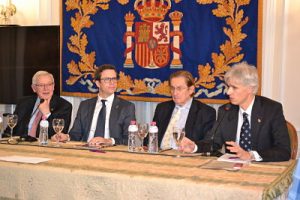 “Diplomacy” is produced and directed by a well-known personality of Madrid’s high society, Santiago Velo de Antelo, son of a deceased great diplomat who, among other posts, was Director of the Diplomatic School of Spain. As a countermaster, it counts with Ambassador Arturo Pérez Martínez.

As you will understand, with such personalities a great event could be celebrated within the framework of the III United Nations Forum, chaired by the President of the Rioja Centre and moderated by Joaquín Antuña, also overwhelmed by this wonderful Diplomatic Academy, by its Wagnerian anthem, its Verdian lyrics and its great respect and loyalty to the Monarchy. An accumulation of notable Ambassadors, Foreign Ministers and illustrious foreign Ambassadors. 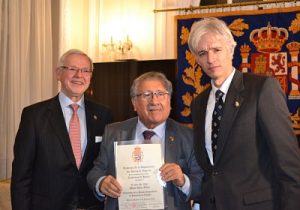 The Ambassadors of Belarus, the Czech Republic, Palestine, the gentle Ambassador of Serbia and of Ukraine were present, as well as other Diplomats from Azerbaijan, Belgium and Russia. Arturo and Santiago gave the Palestinian Ambassador, Mr. Musa Amer Odeh, an Honorary Academic diploma for his great ten-year work in Madrid, which makes him the second in seniority out of the accredited Ambassadors in Madrid. A great activist for the Palestinian cause.

We recommend readers interested in the Diplomatic Academy to check their website http://www.academiadeladiplomacia.es/, where you can find out about the organization and have a look at their Magazine. It’s worth it. 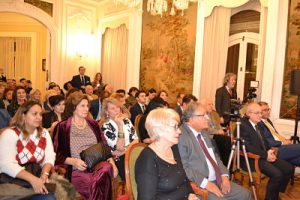 Allow me one last consideration on Diplomats, in which we must distinguish between the personal aspects and the one of the Governments they loyally serve. A friendly relationship can be maintained, regardless of the political nature of the Administration on which they depend. The shape puts into shape. They represent their countries, they enlighten us about them, they update their Governments on the ins and outs of politics, in this case of Spain, and the brightest and most adventurous make future prospects.