This Thursday, February 27, the admirers of the great Joaquin Antuña arrived quickly to the La Lengua Hall of the majestic Riojano Centre. The reason for this meeting is the presentation of his new book entitled “Pedro I El Divino de Pozuelo and other chronicles”. It is a compilation of the daily articles that the author publishes in the Galicia Digital magazine and that every morning, like a Swiss watch, distributes to his dear and passionate readers. His articles are a source of information, national and international, of current themes with brushstrokes of humour and satire.

The roundtable is composed of Ambassador Arturo Pérez, the president of the Riojano Centre José Antonio Rupérez, the editor Lidia González and the author Joaquín Antuña. Each of those present at the roundtable have played a very important role in the publication of the book.

José Antonio Rupérez began his speech by praising Joaquín, to talk about him is to talk about a cultural eminence, he said. And it is true: humour, folklore, eroticism and ingenuity are some of the ingredients that flavour this book. This was also affirmed by the distinguished Arturo Pérez, author of the foreword of the book.

Pedro Sánchez, current president of Spain, is the central character of this book, which includes anecdotes of his private life: his sleepless nights on the sofa or the advices of his dog Turca, Arturo reminds. Other characters like Greta Thunberg or Donald Trump, and even the Pope, also enter the scene. It also includes the conferences organized within the framework of the United Nations Forum and the new union between the OSCE and Peace and Cooperation in the School Prize campaign.

The Nueva Estrella publishing house has celebrated three years reaping great successes thanks to works such as the one presented. Lidia González described Joaquín as a brave man, since laughter frees men from their fears. And this is the purpose of the book of the Divine Pedro, in which he synthesizes, in about 400 pages, in an extraordinary way our contemporaneity, of easy and pleasant reading. 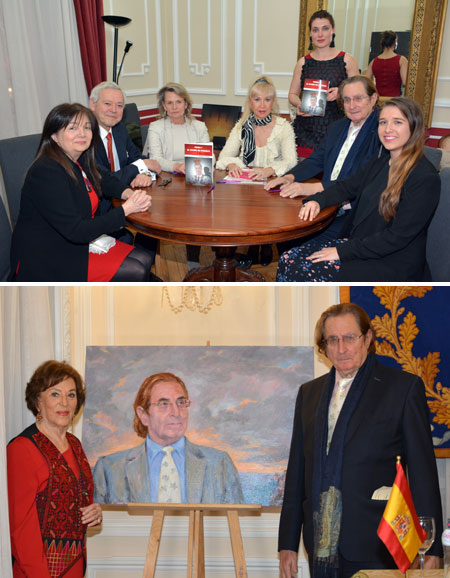 Joaquín Antuña reveals the reason for this suggestive title: why is Pedro crowned? He obtained his sovereign title that exceptional day in which he achieved the required majority and made his historic pose, leaving undefeated the parliamentary battle. Pedro has reached the miracle and has consecrated himself Divine. Then Joaquín saw it clear and, after consulting with Manuel de Maribona, of the Asturian nobility corps and one of the leading specialists in heraldry in Spain, he decided to create a new dynasty: de Pozuelo. The intensity of the president, his relentless commitment to Spain and his remarkable Court of Miracles has inspired Joaquin to tell his intrepid stories.

The public had the opportunity to discover the preview of his next book, whose provisional title is “Frikilandia”. An attractive and, at the same time, provocative name. It will contain stories about the fascinating life and the original, and sometimes contradictory, work of burlesque characters such as Felipe VI the Serious or Boris Johnson.

From Beethoven to Galdós, from ecology to catastrophic transition, from feminism to euthanasia, from the political situation in Spain to the European circus, this book covers a wide range of content that will leave no one indifferent.

This conference was closed with questions from an enthusiastic audience and with the signing and sale of the books that were available to attendees. The event ended with a tasting of Rioja wine, because the Riojano Centre is a place where ” we taste but we also think”.

Congratulations to Joaquín Antuña for the successful reception of his new book.