On February 20, the commemoration of the 54th Anniversary of the creation of the Hospital del Niño Jesús was celebrated, which coincided with the centenary of the hospital that was founded in 1877. It is therefore a very prestigious and world-famous institution in matter of cancer treatment. 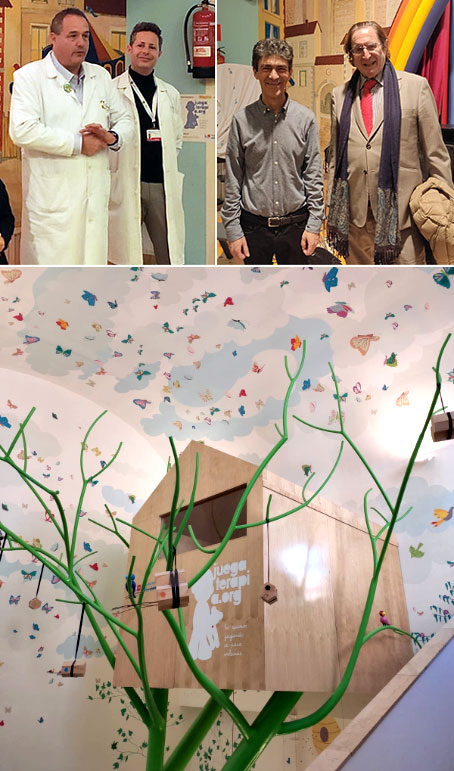 In my UNICEF stage, I remember the meetings that were held with the Ministry of Health and the Hospital del Niño Jesús to treat children from distant countries with serious and rare pathologies, who were facilitated to travel to Madrid for treatment.

This school is also famous for having decorated the hospital units, even the operating rooms, with children’s motifs so that little patients find themselves in the realm of fairy tales. Recently, all these lovely and symbolic decorations have been renovated.

Peace and Cooperation is located in Madrid, in one of best possible communicated areas, with two subway lines, the interchanger that reaches the mountains of Madrid, and no less than twelve bus lines. So, we took the 61 that led us Ester and me to the Retiro, we entered behind a multitude of children and made the journey to the theatre, where a joyful excitement reigned. We salute a diplomat from Cyprus, whose Ambassador, Koula Sophianou, had asked the children for help to get the best logo for the fiftieth anniversary of relations between Spain and Cyprus. And so it was, a vigorous handshake was the result of children’s creativity.

For its part, this school has participated in the latest Peace and Cooperation school campaigns and received our diplomas. It is moving to see these children afflicted by this dreadful disease, which this time contrasted with the healthy and cheerful children of the Laude Fontenebro school choir from Moralzarzal, located in the mountains of Madrid. With his animator and guitarist, the composer José María Rosado conducted the choir consisting of little children and primary school students with a bunch of teachers.

It was such a recital, a trip around the world of children, even adapting the Bella Ciao of the  partisans for schools, the famous Kalinka of Russian folklore, the Shalom of Israel and an Egyptian motif in which we could see a majestic felucca sailing by the Nile.

Star moment, a play dedicated to a sweet squirrel, in which a girl standing over a chair wearing a bowler hat, the type which the troubled Joaquín Sabina puts on, hopped and jumped, imitated a fall and caused the audience to rejoice, creating great enthusiasm among healthy, sick, visitors, parents, teachers and authorities.

He recalled the excitement in Italy for the annual children’s competition held in Bologna called “Lo Zecchino D’oro”, where a children’s choir performs a huge repertoire of kids’ folklore. José María Rosado could launch a similar contest in Spain. 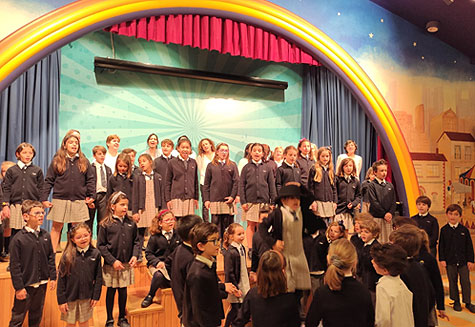 Then, an actress teacher, a local Gloria Fuertes, with her same verve and strong voice, told us two stories; one dedicated to a squirrel, and another precious one about the stones. Nine students lined up under the stage, in the middle of whom there was a sick little girl with her hospital dropper. To all of them, this Gloria Fuertes, gave them a stone, telling us the different functions that it can have. For example, David eliminated Goliath, another was enraged and threw it at his companions, but the important thing was not the usefulness of the stone, but what you do with it. Lots of applause and we all learnt the moral.

The senior staff of the Ministry of Education of the Community of Madrid attended, led by its director, José Ignacio Martín Blasco, and its Deputy Director, José Mª. Lozano, to whom I had the opportunity to greet and inform him about our activities with this benevolent school.

Miguel’s overflowing kindness was able to conduct the celebration very well, that, on a wonderful sunny day, on the verge of the Madrid’s Retiro, encouraged us to shout from the rooftops “How beautiful it is to live”.