A celebration of the Human Rights

A celebration of the Human Rights

The II United Nations Forum of Peace and Cooperation came to an end yesterday, on December 10, with its final act, as always at the Centro Riojano de Madrid. The day was not a casual choice: on this date the 71st anniversary of the Universal Declaration of Human Rights is celebrated, and the presentations focused on that. 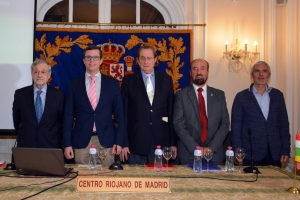 The table was constituted of different personalities and, in a certain sense, complementary among them: José Antonio Rupérez, president of the Centro Riojano, opened the act as usual, followed by Joaquín Antuña, president and founder of Peace and Cooperation, who presented and moderated the three speakers.

The first speaker, Enrique Gaspar, a long-standing journalist and vice president of the Spanish Silk Institute, began by asking “how can we convince each of us of the importance of human rights?” The problem is in the practical application: there are not only people with different ideas, more importantly there are states with different laws and priorities, which we cannot judge as they are based on their history.

Typical of a man who works in the media, with 40 years of television on his shoulders, he also referred to the Greta Thunberg phenomenon: it is true that environmental issues are more appealing than human rights, because they unite different cultures of the wide world, but this problem existed before Greta’s fame and will keep  if urgent measures are not taken.

He also told us about his current project, turning the Silk Road into a path of peace by applying the Sustainable Development Goals (SDGs) to achieve it. 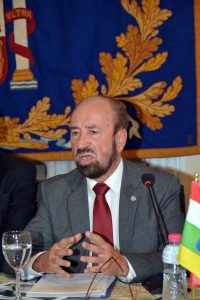 With the second speaker, Manuel Herranz, representative of the Movement for Human Unity, the utopia became present. His organization, which is planning to hold a congress in 2020, fights to introduce a new right, the right to freedom. Rationally, the human being is interested in human unity, but there is the dilemma between the “homo homini lupus” of Thomas Hobbes, with his Leviathan, which imposes by force the respect for human rights, or the right to freedom. Another question Manuel asked was whether we can expect respect for human rights from a body born to make war, quoting Sun Tzu.

In the end he sentenced that no one can guarantee the right to freedom, because it would be a contradiction resulting in restricting our freedom, but we can believe in the United Nations to get a consensus of the international community.

Emilio Ginés developed the final presentation, who for his role in the Committee for the Prevention of Torture of the United Nations, knows the reality of the violation of human rights. He stressed that the Universal Declaration of Human Rights is not a strictly legal document, but a set of ideas, principles, for informational purposes.

He described how the year 1945 unveiled the great cruelty and human violence with hundreds of millions of victims and with terrible episodes such as clothing woven with human skin in the lager of Auschwitz. He added that these rights need to be applied in places that are hardly visible on the maps and that we have almost forgotten. This means that the momentum of the horror of the Second World War was not enough to prevent the revival of violence. 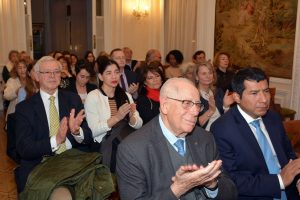 He then referred to the two protocols which complement the Universal Declaration and that only 15 countries, including Spain, have ratified. The economic, social and cultural rights protocol allows a more complete picture of what is really happening. He described the need to take positive measures to guarantee everyone the same dignity. Intergovernmental cooperation and sense of citizenship are required to achieve improvements. Finally, he gave a brushstroke on the role of schools in gender-based violence, a subject he knows thoroughly for his work with women in Latin America and reiterated that education begins at home.

During the question time, very interesting monologues were heard such as one by Isabel Aránguez, a university defender of the Complutense University of Madrid or that of Gianna Prodan, the Italian poet, as passionate as ever, and other illustrious speakers. In the end, the ambassador of Nicaragua took the floor and congratulated the Centro Riojano and Peace and Cooperation for organizing this interesting debate on the virtuality of human rights.

At the end of the party there was a toast for human rights, for which good will, projects and utopia are necessary.