Home/Home Fijas, News/Rosa Olazábal signs the book of condolences in memory of Queen Elizabeth II of the United Kingdom
Previous Next

P&C2022-09-26T13:51:39+02:0020 September 2022|Home Fijas, News|
In the photo, Sarah Cowley, Ministerial Advisor, and Rosa Olazábal, President of Peace and Cooperation, at the signing of the book of condolences. Photo by Almudena Alonso.
Following the death of Her Majesty Queen Elizabeth II, the President of the Foundation Peace and Cooperation Rosa Olazábal requested an audience with the Ambassador of said country Hugh Elliott, to sign the book of condolences. On 15th September 2022, at the official headquarters of the British diplomatic mission in Spain, Rosa Olazábal expressed her condolences to the royal family and the people of the United Kingdom and the Commonwealth, in the presence of Ministerial Advisor Sarah Cowley, the Ambassador could not be present due to his schedule. The President of Peace and Cooperation praised Her Majesty Queen Elizabeth II’s kindness and generosity in awarding her a scholarship for her studies at Canterbury, United Kingdom, in 1987 and reminded us Elizabeth II’s outstanding service to the Crown. 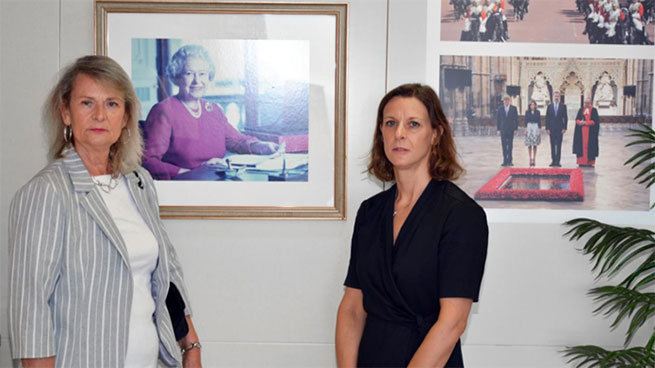