The Azerbaijani embassy organised on 26th may a traditional and distinguished reception to celebrate the Azerbaijani National holiday and the 30th anniversary of the establishment of diplomatic relations with Spain.

The event was also attended by Madrid social life personalities, media, and several members of the Azerbaijani community living in Madrid.

After hearing the Azerbaijani and Spanish national anthems, the Azerbaijani ambassador made a speech and emphasised that the independence day is linked to 28th may 1918 that corresponds to the enactment of the Democratic Republic of Azerbaijan, first democratic republic in the East.

The ambassador said the first secular and parliamentary republic of the East had established important progressive institutions : a multiparty system with a pluralist parliament and free media.

The Republic ensured political and civil rights to its citizens, without any discrimination about nationality, ethnic origin, gender, religion and social condition. Azerbaijan was the first country of the East to grant women the right to vote.

He reminded everyone that energy cooperation has a key role in economic collaboration. Azerbaijan is one of the reliable partners in said sector. The 1994 “Contract of the century” renewal with the signing of the Agreement on joint development of Azeri Chirag-Guneshli oil zones in the Azerbaijan area of the Caspian sea until 2050, as well as the implementation of TransAdriatic (TAP) and TransAnatolia (TANAP) gas pipeline show the Azerbaijan key role in European energy security.

Moreover, Ramiz Hasanov highlighted the development of the diplomatic relations between the Republic of Azerbaijan and the Kingdom of Spain since their establishment on 11th february 1992. The Azerbaijani embassy in Spain, established in 2005, is a mainstay of the development of bilateral relations. Furthermore, the diplomatic representation of the Kingdom of Spain has been developing its activity in Azerbaijan since 2014. 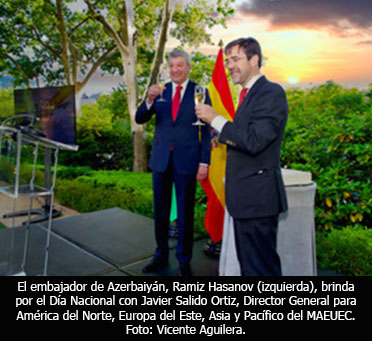 Thus, the Azerbaijani ambassador emphasised that the Republic of Azerbaijan considers Spain as its strategic partner and wishes to keep developing the collaboration with the country.

To conclude his speech, the ambassador expressed “the confidence that, in 2022, the year of the celebration of the 30th anniversary of diplomatic relations between Azerbaijan and Spain, the high-level relations with the friendly Kingdom of Spain will be deepened, reaching an even higher level”.

Furthermore, Javier Salido Ortiz, Foreign Affairs Department’s director general for Northern America, Eastern Europe, Asia and Pacific, European Union and Spanish Kingdom cooperation, said the Kingdom of Spain had been one of the first countries recognising the independence of the Republic of Azerbaijan in 1991 and establishing diplomatic relations with the country.

Then, the famous Azerbaijani jazz pianist Elbey Mammadzade played music. He was acclaimed by the public.

The guests could enjoy Azerbaijani culinary specialities and familiarise themselves with several documentary sources reflecting the History, national traditions and tourist potential of Azerbaijan.