Three great ladies gave prestige and shine to the annual ceremony of the School Day of Nonviolence and Peace, introduced by the Mallorcan educator Llorençe Vidal on the anniversary of the death of Mahatma Gandhi. For the eighth time this commemorative event was held at the Caude de Majadahonda school, which participated very prominently with a choir of schoolchildren animated by the school’s music band and an allegory by Nelson Mandela in the school’s large playground. 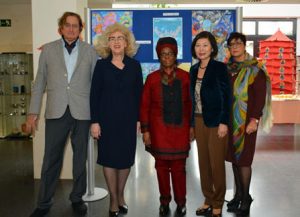 I am a veteran of School Day of Nonviolence and Peace since 1986, with the unforgettable Professor Tierno. There was a very long stage in the Egyptian Institute of Madrid, passing through the cultural centre of the Villa with my friend Mayor Álvarez del Manzano and, in recent years, the symbolism and projection of this peace festival has been carefully taken care of. A live communication with the Spanish base in Antarctica, a master lesson with the European Space Center and a conference by a Russian diplomat about Yuri Gagarin. The participation of two ambassadors from India, commemorating the figure of Mahatma Gandhi and in 2020 focusing on one of the great characters of the twentieth century, the politician and pacifist Nelson Mandela.

This time, as I told you at the beginning, there was a trio of ladies. The Polish ambassador, Marzenna Adamczyk, walking among the public, staged the tragedy of the Jewish people, victim of “otherness” who was already blamed for the medieval plague, as in Toledo for the murder of the Jewish girl, I add. She revived the progroms suffered by the Jews to arrive riding back in time to Germany in the thirties of the twentieth century, in which she said literally that the German people so learned, people of Goethe, Beethoven and Schiller democratically chose Adolf Hitler. The result: six million Poles and the Shoa of the Jewish people.

The South African activist, Thenjiwe Ethel Mtintso, who was secretary of the ANC (African National Congress), ambassador to Cuba and currently in Madrid, also descended to emotional speech, as her Polish colleague had done. He evoked the repression and persecution suffered by blacks and people of colour in her country. The description of the barbarism of Apartheid was followed by a portrait of Nelson Mandela recalling 29 years in prison on an island, Robben Island, in the bay of Cape Town. She also reported the situation of Africans who were besieged by the powers that want their raw materials and contempt for blacks, perhaps evoking a current situation in Spain, where the footballer Iñaki Williams received shouting uttered by the fans of the Espanyol Club of Barcelona. Her tone was very vindictive talking about the struggle for equality of all the inhabitants of the planet continues.

For her part, Professor Kayoko Takagi, recently decorated by the Emperor of Japan, Naruhito, evoked the facts of Hiroshima and the sense of pain that II World War meant for her country, her very calm and soft tone comforted us all in the need for peace in the world. 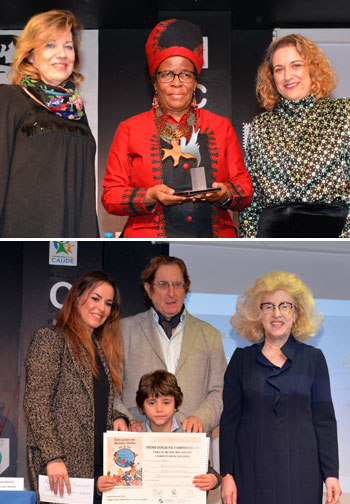 In response to these three distinguished ladies, I contributed to the proposal of Peace and Cooperation to avoid violence by sharing the values ​​of the Charter of San Francisco of the United Nations, which is also born from the horror of war. I underlined the need for reconciliation, it’s no worth regretting the fate of the Jews, being outraged by the blindness of the white racists or moaning for atomic bombs if we don’t put the word “love” in our hearts, if the Jew is not loved, the different and if the “otherness”, to which Marzenna referred to, is destroyed.

The contest prize was awarded with CTBTO “For a safer world” to the seven-year-old Spanish winner Alvaro Cobos Palacino, who attended with his lucid family and the wonderful school of Badajoz “Ciudad de Badajoz”, from Extremadura. He was awarded with The Nelson Mandela Trophy. Congratulations.

Peace movements will always stand up not only for the destruction of weapons but also for the reconciliation of spirits. As Mother Teresa said “Peace begins with a smile and at home” and the admonition of Mahatma Gandhi “There is no way for peace, peace is the way”, or with Benjamin Franklin who invites us to build bridges and not walls.

Let us repeat with María Montessori the need to educate for peace and with Peace and Cooperation education for universalism.

Let’s put intelligence at the service of Peace and let’s underline with Albert Einstein the need for understanding to achieve Peace. For this reason, Peace and Cooperation has introduced the School Day for Understanding and Peace that we organize jointly with the School Day of Nonviolence and Peace.

For those interested in these issues, I suggest you to contact Elvira Sánchez-Igual of the World Association of Early Childhood Educators and part of the board of Peace and Cooperation, who has specialized in education from 0 to 3 years and organizes a congress aimed at educators in the first days of March,

As you can see, dear readers, as the bullfighter Rafael El Gallo said “It takes all sorts”.