Peace and Cooperation received the presitigious award “Peace and Security 2006” 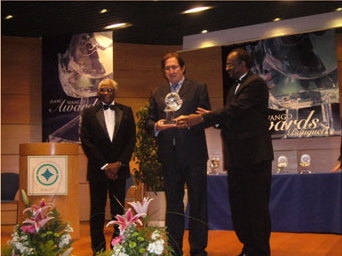 For 25 years, working under the motto of “Create and Survive”, Peace and Cooperation has tirelessly promoted universal education directed at the most vulnerable sectors, strengthened development of local and national agricultural economies, reinforced local production and local business networks and improved health and medical services (including efforts against malaria, AIDS and other diseases). It has similarly helped marginalized populations have access to decent housing, promoted gender equality and carried out food safety projects. Its renowned worldwide School Award initiative recognises students, teachers, and schools that work towards the ideals of peace, multicultural relations and diversity.

Peace and Cooperation works in three main areas: development, education and human rights on an international level, reflecting the objectives of the Charter of the United Nations signed in San Francisco.

Peace and Cooperation is the founder member of the Federation of Associations for the Defence and Promotion of Human Rights in Spain (1993). It has participated in meetings of the Organization for Security and Cooperation in Europe (OSCE) with respect to human dimension issues. It actively collaborates with the Human Rights Office of the Ministry for Foreign Affairs. It supports, in particular, the rights of religious minorities.