On 27th October, Peace and Cooperation had the pleasure of attending the 9th Elcano Forum on Global Terrorism organised by the Real Instituto Elcano, in collaboration with the United States Embassy in Spain, the Spanish State Secretariat for Security and the Programme on Extremism of the George Washington University. 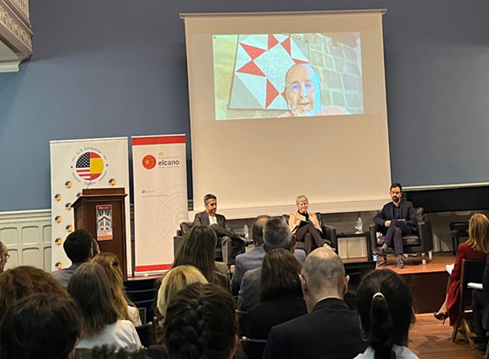 Terrorism has always existed but its rise dates back to the 19th century. Terrorism is defined by the authors Adela ASUA BATARRITA and Maïte ALVAREZ VIZCAYA as “the commission of a series of particularly serious offences […] aimed at imposing or intimidating persons, groups or institutions”. Despite the univocity of this definition, there are various forms of terrorism, which have continued to evolve, as well as related claims. Some forms of terrorism are linked to extremist ideologies, which was discussed at this forum.

The forum opened with a speech of the President of the Real Instituto Elcano José Juan RUIZ, then with the intervention of Abel VECINO. They both reminded us the stakes of terrorism, which threatens the security of citizens, states and democracy.

Then, the first panel moderated by Carola GARCIA-CALVO and composed of Manuel RODRIGUEZ GARCIA-RISCO and Francisco José VASQUEZ discussed the persistent challenges posed by Islamist extremism to the Spanish authorities. After a long experience of fighting the terrorist actions of the Basque separatist organisation ETA, the Spanish authorities are at the forefront of the fight against Islamic terrorism. Islamism is a new issue for Spain because it is both the deadly attacks and the ideology that threaten its security, the security of its citizens and its democracy. After the attacks in Madrid on 11th March 2004, the Spanish authorities have rethought the organisation of its internal security structures in order to face the new threats that Islamism has brought.

The second panel, moderated by Carmen GONZALEZ ENRIQUEZ and made up of Cynthia MILLER-IDRISS and Daniela PISOIU, intervened on the rise of far right ideology and parties in the United States and Europe, an extremism at the origin of more and more violent and terrorist actions.

Various forms of terrorism still threaten the security of countries and citizens around the world. The terrorism of Islamist extremists has spread to every continent. Therefore, it is called global terrorism. The rise of far right ideology, which has led to terrorist attacks, is a new threat to global security.